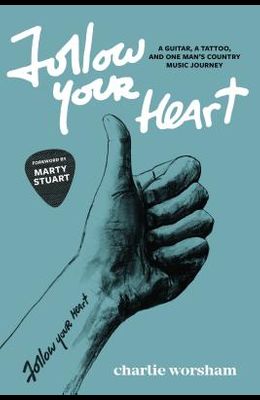 Follow Your Heart: A Guitar, a Tattoo, and One Man's Country Music Journey

How three words became an instruction manual for life... As a youngster seeking guidance and perspective, musician Charlie Worsham received three words of advice from the legendary Marty Stuart that changed his life: Follow your heart. This sage philosophy became Worsham's instruction manual for living. Committed to permanent ink on the inside of his left forearm, he reads it whenever he's playing guitar--which, as it turns out, is pretty much all the time. In Follow Your Heart , Worsham shares his unforgettable journey around the world, playing music and living adventures that his 10-year-old Mississippi-kid self would never believe possible. He's held a koala bear in Australia, played for soldiers in Iraq, and shared arena stages with Faith Hill, Miranda Lambert, and Taylor Swift in between. He's played crappy bars, national television shows, the Grand Ole Opry, and country music's Mother Church, the Ryman Auditorium. He's met heroes who have become friends and collaborators. He's cursed his luck and shouted hallelujahs. Through it all, Charlie Worsham has followed his heart. Paying homage to a philosophy kindly shared and the pursuit of a life fully lived, Follow Your Heart is the story of a man with a guitar, a tattoo, and a passion for his journey no matter where it takes him.