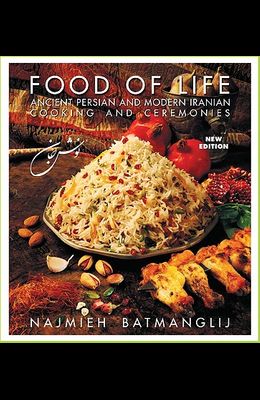 This is an updated and expanded fourth edition of New Food of Life: Ancient Persian and Modern Iranian Cooking and Ceremonies ISBN 0934211345.

From the front Cover Cooking plays important roles in every culture, but Persian cuisine can claim a relationship to its native land that is uniquely deep and intricate. This book celebrates the central place of food in the life of Iran, a story extending back almost 4,000 years, when recipes were first recorded in a cuneiform script on clay tablets. At the same time, Food of Life--updated and expanded in this new edition--is designed to be used by today's cook. It provides a veritable treasury of recipes: 330 in all, presented in an easy to-follow format, along with standard variations and, in many cases, a vegetarian version. The title of the book comes from the words nush-e jan, literally food of life--a traditional wish in Iran that a dish will be enjoyed. Along with daily gifts of pleasure, Persian cooking has figured intimately in numerous Iranian festivals and ceremonies. The menus and recipes associated with such events are described in Food of Life in detail, from the winter solstice celebration, Shab-e Yalda, or the sun's birthday eve, to the rituals and symbolism involved in a modern Iranian marriage. Also woven through this book are many examples of how food has inspired artists, poets, and other luminaries of Persian culture. The book includes the miniatures of Mir Mosavvar and Aqa Mirak; excerpts from such classics as the fourth-century tale Khosrow and His Knight, the tenth-century Book of Kings, and the Thousand and One Nights; poems by Omar Khayyam, Rumi, and Sohrab Sepehri; and the humor of Mulla Nasruddin. Even as it honors venerable traditions and centuries of artistic expression, Food of Life propels Persian cooking into the twenty-first century. Today, with most of the ingredients in this book's recipes readily available throughout the U.S., anyone can reproduce the refined tastes, textures, and beauty of this great cuisine-- ancient, and also timeless.