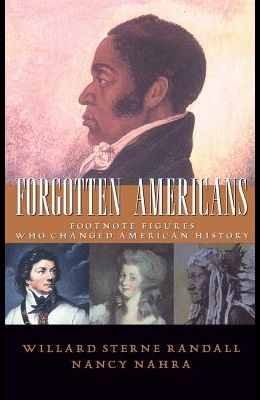 In 1779 a Philadelphia belle, Margaret Shippen, married a hero of the ongoing Revolution, General Benedict Arnold. Within months Peggy was sending coded messages to an old suitor from England, conveying Arnold's promise to defect. When their plot was discovered, the general fled. Peggy distracted George Washington with hysterics before following her husband. The British government eventually paid Peggy far more than Benedict Arnold ever received.A generation later, the Philadelphia neighborhood where Margaret Shippen had grown up was home to a businessman named James Forten. Due to his invention for rigging sails, Forten was rich enough to build large public halls and bankroll political causes. At the same time, this veteran of the Revolution was losing his political voice because he was black.Margaret Shippen Arnold and James Forten are just two of the fifteen fascinating but little-known lives told in Forgotten Americans. Weitten by an honored biographer and an award-winning poet, this entertaining book shines a light on overlooked figures. Traditional histories have often neglected these people, for many reasons. Some were on the losing side of a conflict, such as Tecumeseh, who spent years trying to unite Indian nations against white settlers. Others worked behind the scenes, like Annie Turner Wittenmyer, who took charge of supplying Union hospitals in the West during the Civil War. And some we disregard because their actions now seem unsavory, as with the once-celebrated Indian-slayer Tom Quick.From these fascinating threads, Will Randall and Nancy Nahra weave a rich tapestry of American life. In it we witness the power of religious revival and the lure of mass entertainment. We watch philosophical differences split the nation. We see the shift in Native American's lives from Teedyuscung, a Delaware murdered despite his conversion to Christianity, to Louis Sockalexis, the baseball prodigy. These lively stories also reveal little-known facets of the famous: Benjamin Franklin's disinherited son, Thomas Jefferson's secret politicking, and how Mary Todd Lincoln's confinement to a mental hospital became a public issue. From early settlements to the close of the nineteenth century, the brief biographies in Forgotten Americans engagingly fill out our knowledge of the nation's past.