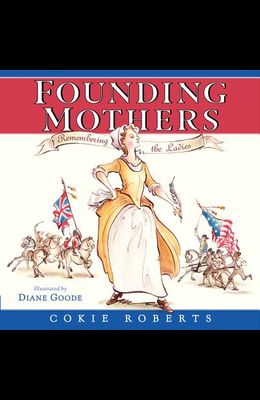 by
Cokie Roberts and Diane Goode

#1 New York Times bestselling author and celebrated journalist Cokie Roberts brings young readers a stunning nonfiction picture book that highlights the female patriots of the American Revolution. Beautifully illustrated by Caldecott Honor-winning artist Diane Goode, Founding Mothers: Remembering the Ladies reveals the incredible accomplishments of the women who orchestrated the American Revolution behind the scenes. Roberts traces the stories of heroic, patriotic women such as Abigail Adams, Martha Washington, Phillis Wheatley, Mercy Otis Warren, Sarah Livingston Jay, and others. Details are gleaned from their letters, private journals, lists, and ledgers. The bravery of these women's courageous acts contributed to the founding of America and spurred the founding fathers to make this a country that remembered the ladies. This compelling book, based on the author's acclaimed work for adults, Founding Mothers , includes a rich time line, biographies, an author's note, and additional web resources in the back matter. Parents and educators looking for a more in-depth book beyond the Rosie Revere and Rad Women series will welcome Founding Mothers .

From the Back Cover While much has been written about the men who founded our nation, this history includes only part of the story. Though they may not have signed the Constitution, written the Declaration of Independence, or fought in battles, the wives, mothers, sisters, and daughters behind the scenes of the Revolution contributed to their country's birth as significantly as the men in the spotlight. New York Times bestselling author Cokie Roberts presents the contributions of these patriots, the women who fought the Revolution as courageously and heroically as the men, often defending the doors of their very homes. The stories of these founding mothers are found in their personal correspondence, private journals, ledgers, and lists. Roberts reveals the surprising tales of fascinating women such as Abigail Adams, Mercy Otis Warren, Deborah Read Franklin, Eliza Lucas Pinckney, Catharine Littlefield Green, Esther DeBerdt Reed, and Martha Washington. The extraordinary triumphs of these women created a shared bond that urged the founding fathers to Remember the Ladies.