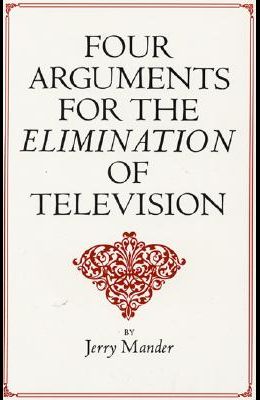 Four Arguments for the Elimination of Television

A total departure from previous writing about television, this book is the first ever to advocate that the medium is not reformable. Its problems are inherent in the technology itself and are so dangerous -- to personal health and sanity, to the environment, and to democratic processes -- that TV ought to be eliminated forever. Weaving personal experiences through meticulous research, the author ranges widely over aspects of television that have rarely been examined and never before joined together, allowing an entirely new, frightening image to emerge. The idea that all technologies are neutral, benign instruments that can be used well or badly, is thrown open to profound doubt. Speaking of TV reform is, in the words of the author, as absurd as speaking of the reform of a technology such as guns.