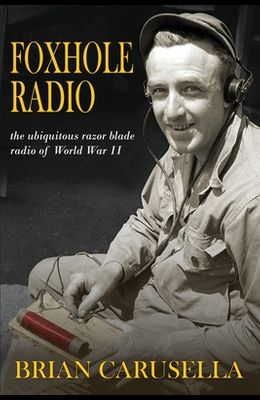 Foxhole Radio is the story of one of the more remarkable pieces of WWII soldier improvisation, a simple crystal radio receiver that used a razor blade for its detector. It is not remarkable for its technology - other radios worked better - but because hidden in its unglamorous amalgamation of scrounged parts is the history of army radio, morale, solid state electronics, field fortifications, and even military grooming. To distract himself for a while from the monotony of sitting in a foxhole and from the sporadic shelling by the enemy, a soldier on the Anzio beachhead made the first foxhole radio to listen to whatever stations might be in range. With no crystal nor cat whisker, he substituted what was on hand, a razor blade and a safety pin.It spread, by word of mouth mostly, across the beachhead, Europe and to the Pacific. Adopted by civilian radio enthusiasts, it became part of the lore of home experimenters and grade school science projects. More than a curious artifact of wartime improvisation, the foxhole radio reveals the story of the military's role in the radio development, and an intertwined tale of army shaving, corporate intrigue, and the evolution of the radio wave detector that led to the first solid state electronics. Foxhole Radio follows the history of army radio from the first experiments in the 1890s, to its coming of age during WWI, and its use for propaganda and morale during WWII. The razor and safety pin detector reveal a conflation of standard, archaic and folk radio wave detectors, the persistence of lore, and the army's battle with facial hair. The name foxhole radio itself tells of early field fortifications, words borrowed from across the lines, and the evolution of military jargon. Most importantly, Foxhole Radio tells the stories of the veterans who built these sets, how they built them, what they listened to, and their everyday realities. Though separated by thousands of miles with very different experiences, they were all united by a strange little radio and their desire to hear music and news from home.

List of All Editions of Foxhole Radio: the ubiquitous razor blade radio of WWII