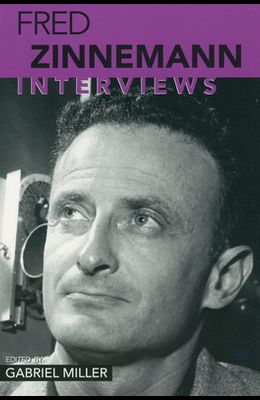 Part of the Conversations With Filmmakers Series
by
Gabriel Miller

Fred Zinnemann (1907-1997) was one of Hollywood's most honored directors. In a career that spanned fifty years, he won four Academy Awards and directed such classic movies as From Here to Eternity, A Man for All Seasons, The Day of the Jackal, and High Noon. Covering thirty-three years of conversations (1964-1997), Fred Zinnemann: Interviews provides a revealing glimpse into the director's vision as he discusses in his cultivated, elegant voice his varied experiences as a filmmaker. He defends himself against charges that his films are too objective or unemotional. He reminisces about his experiences with independent director Robert Flaherty and his early years in the American studios and recounts his disappointment and frustration over his abortive attempt to film Man's Fate. Filled with intelligent commentary and recollections about all of his important work, the interviews disclose an artist committed to his craft, his vision, and the human enterprise. Despite the range of genres in which he worked--the western, the musical, film noir, and the social problem film--Zinnemann was aesthetically committed to social realism. Due in part to his training under Flaherty and his upbringing in Austria, where he witnessed firsthand the rise of fascism, Zinnemann was always drawn to stories that highlighted the testing of conscience in people caught up in a historical moment. World War II provided the backdrop to much of his work. As he put it, I have always been concerned with the problem of the individual who struggles to preserve personal integrity and self-respect.

Conversations With Filmmakers Series In Order - By Gabriel Miller