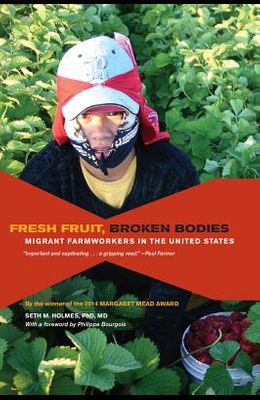 by
Seth Holmes and Philippe Bourgois

Fresh Fruit, Broken Bodies provides an intimate examination of the everyday lives and suffering of Mexican migrants in our contemporary food system. An anthropologist and MD in the mold of Paul Farmer and Didier Fassin, Holmes shows how market forces, anti-immigrant sentiment, and racism undermine health and health care. Holmes's material is visceral and powerful. He trekked with his companions illegally through the desert into Arizona and was jailed with them before they were deported. He lived with indigenous families in the mountains of Oaxaca and in farm labor camps in the U.S., planted and harvested corn, picked strawberries, and accompanied sick workers to clinics and hospitals. This embodied anthropology deepens our theoretical understanding of the ways in which social inequalities and suffering come to be perceived as normal and natural in society and in health care. All of the book award money and royalties from the sales of this book have been donated to farm worker unions, farm worker organizations and farm worker projects in consultation with farm workers who appear in the book.

From the front Cover In Fresh Fruit, Broken Bodies , Seth Holmes offers up an important and captivating new ethnography, linking the structural violence inherent in the migrant labor system in the United States to the social processes by which it becomes normalized. Drawing on five years of fieldwork among the Triqui people from Oaxaca, Mexico, Holmes investigates local understandings of suffering and illness, casting into relief stereotypes and prejudices that he ties to the transnational labor that puts cheap food on American tables. Throughout this compelling volume, Holmes considers ways of engaging migrant farm workers and allies that might help disrupt exploitation that reaches across national boundaries and can too often be hidden away. This book is a gripping read not only for cultural and medical anthropologists, immigration and ethnic studies students, students of labor and agriculture, physicians and public health professionals, but also anyone interested in the lives and well-being of the people providing them cheap, fresh fruit.--Paul Farmer, Co-founder of Partners In Health and Chair of the Department of Global Health and Social Medicine at Harvard Medical School. Dramatically portrays the harsh physical and emotional conditions under which farm workers labor. As they complete their brutal work, they suffer long-term disabilities in their senior years. This can be avoided with reasonable and decent working conditions. Let us remember them as we eat our daily meals.--Dolores Huerta This book takes concepts from the world of scholarship to enrich the understanding of people's lives; and the vivid detail, and empathetic portrait of the reality of people's lives enrich scholarship. The book leaves the reader in no doubt that economic arrangements, social hierarchies, discrimination, poor living and working conditions have profound effects on the health of marginalized people. It is all done with the touch of a gifted writer. The reader lives the detail and is much moved.--Professor Sir Michael Marmot, Director, UCL Institute of Health Equity Provides a unique understanding of the political economy of migrant labor and of its human cost.--Didier Fassin is Professor of Social Science at the Institute for Advanced Study, Princeton, and the author of Humanitarian Reason. Here in the U.S., we both utterly rely on immigrants from the South to feed us, and erect walls and employ militias to keep them out. In this groundbreaking new book, Holmes goes underground to explore what this bizarre duality means for the people who live it. A brilliant combination of academic rigor and journalistic daring.--Tom Philpott, Food and Agriculture Correspondent, Mother Jones Magazine Fresh Fruit, Broken Bodies is a powerful exposé of the social and political realities that mark the bodies and limit the life prospects of Mexican migrant farmworkers in the world's richest economy. An absorbing read and a resolute call for just labor relations and health equity as key to a common and sustainable human development.-- João Biehl, author of Vita: Life in a Zone of Social Abandonment Holmes' book is a lyrical ethnographic rendition of Robert Chailloux's Still Life with Strawberries, revealing the back stage, back-breaking work of indigenous Mexican pickers trapped in patron-client relationship to Japanese-American farm owners who are themselves trapped in price wars with global competitors to produce the beautiful abundance that we take for granted.--Nancy Scheper-Hughes, author of Death without Weeping A tour du force ethnography. Holmes gives us the rare combination of medical, anthropological, and humanitarian gazes into the lives of Oaxacan migrant farmworkers in the United States. Their agricultural field work and his anthropological fieldwork intersect to produce a book full of insights into the pathos, inequalities, frustrations, and dreams punctuating the farmworkers' daily lives. Through Holmes' vivid prose, and the words of the workers themselves, we feel with the workers as they strain their bodies picking fruit and pruning vines, we sense their fear as they cross the U.S.-Mexico border, we understand their frustrations as they are chased and detained by immigration authorities, and cheer at their perseverance when faced with bureaucrats and medical personnel who treat them as if they are to blame for their own impoverished condition. A must read for anyone interested in the often invisible lives and suffering of those whose labor provides for our very sustenance.--Leo R. Chavez, Professor of Anthropology, University of California, Irvine In his first book, anthropologist and doctor Seth M. Holmes gives us an intimate look into the lives of migrant farmworkers. Through his exhaustive research, Holmes reveals the struggles of the millions who work in our fields, every year, to put food on our tables. In deliberations about immigration and farm policy, these are the stories that should be at the center. Holmes' helps us put them there. Anna Lappé, author Diet for a Hot Planet and founder, Real Food Media Project Like the reporting of Edward R. Murrow and the labors of Cesar Chavez, Seth Holmes' work on these modern-day migrants reminds us of the human beings who produce the greatest bounty of food the world has ever seen. They take jobs other American workers won't take for pay other American workers won't accept and under conditions other American workers won't tolerate. Yet except for the minority of farm workers protected by United Farm Workers' contracts, these workers too often don't earn enough to adequately feed themselves. Seth Holmes' writing fuels the UFW's ongoing organizing among farm workers and admonishes the American people that our work remains unfinished.--Arturo S. Rodriguez, President, United Farm Workers of America