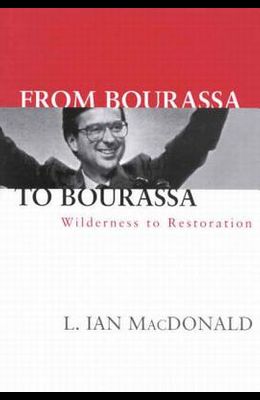 From Bourassa to Bourassa: Wilderness to Restoration, Second Edition

Robert Bourassa, a pariah after losing power to the separatist Parti Qu b cois in the 1976 election, emerged a decade later from political exile to lead his party back to power. As he said: I succeeded my successor. Claude Ryan, formerly the respected publisher of Le Devoir, had led the Quebec Liberal Party and the federalist coalition to a decisive victory in the 1980 referendum on Quebec sovereignty, but the uneasy alliance of Ryan and Pierre Trudeau did not survive the prime minister's unilateral patriation of the Canadian constitution. This contributed to Ryan's defeat in the 1981 Quebec election and to Bourassa's restoration. First published to critical acclaim in 1984, this second edition of From Bourassa to Bourassa brings the story up-to-date, recounting Bourassa's landslide election victory in 1985 and his subsequent role in the Meech Lake Accord and the Canada-U.S. Free Trade Agreement, the two issues that largely defined the decade of the 1980s for Quebec and for Canada.