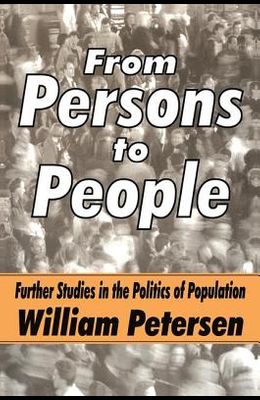 From Persons to People: A Second Primer in Demography

Problems associated with aggregation and classification are the underlying theme of this book. When data assembled from individuals are presented as group characteristics, this process has logical complications. Racial profiling and ethnic discrimination are obvious examples of the problem. Petersen's book analyzes in general how information from persons turns into statistics about specific people. The book is divided into two parts covering population and ethnicity. The first two chapters in part 1, on population statistics and the age-sex structure, are the foundations for any demographic analysis. Chapter 3 is a brief review of the interminable debate over whether the subsistence of mankind is on the point of depletion. The three following chapters are on population theory as expounded by Malthus, Marx, and Communists. Chapters 7 and 8 discuss the competition between parents and the state concerning which of the two shall decide on procreation. Chapter 9 is an account of population at the frontier, using Nevada as a prototype. The last chapter in part 1 is a proposal, to moderate the endless debate about abortion. The first two chapters in the second part of the book concern methods for analyzing ethnicity that are essential for a full understanding of demography: how and by whom ethnic groups are defined. The next chapter discusses some of the many subdivisions of European nations, countering the analyses of European unity with the fact that most of its regions are not themselves homogeneous. In a number of instances American statistical agencies have used surnames to identify nationalities, with invalid results, as the author shows in the next chapter. Jews as a Race is an attempt to counter Nazi dogma with a rational analysis of a contentious topic. The subsequent chapters compare Japanese and Chinese Americans as small but fascinating minorities and analyze the social consequences of religion from theoretical and factual viewpoints. The last chapter summarizes the conclusions to be drawn from these topics. Demographers, sociologists, and statisticians, as well as those generally concerned with social policy, will find From Persons to People useful and courageous-the hallmark of the dean of sociological demography. .