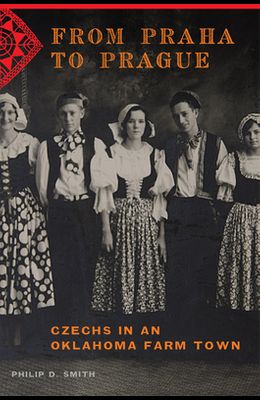 From Praha to Prague: Czechs in an Oklahoma Farm Town

Around the turn of the twentieth century, thousands of Czechs left their homelands in Bohemia and Moravia and came to the United States. While many settled in major American cities, others headed to rural areas out west where they could claim their own land for farming. In From Praha to Prague , Philip D. Smith examines how the Czechs who founded and settled in Prague, Oklahoma, embraced the economic and cultural activities of their American hometown while maintaining their ethnic identity. According to Smith, the Czechs of Prague began as a clannish group of farmers who participated in the 1891 land run and settled in east-central Oklahoma. After the town's incorporation in 1902, settlers from other ethnic backgrounds swiftly joined the fledgling community, and soon the original Czech immigrants found themselves in the minority. By 1930, the Prague Czechs had reached a unique cultural, social, and economic duality in their community. They strove to become reliable, patriotic citizens of their adopted country--joining churches, playing sports, and supporting the Allied effort in World War II--but they also maintained their identity as Czechs through local traditions such as participating in the Bohemian Hall society, burying their dead in the town's Czech National Cemetery, and holding the annual Kolache Festival, a lively celebration that still draws visitors from around the world. As a result, Smith notes, succeeding generations of Prague Czechs have proudly considered themselves Czech Americans: firmly assimilated to mainstream American culture but holding to an equally strong sense of belonging to a singular ethnic group. As he analyzes the Czech experience in farm-town Oklahoma, Smith explores several intriguing questions: Was it easier or more difficult for Czechs living in a rural town to sustain their ethnic identity and culture than for Czechs living in large urban areas such as Chicago? How did the tactics used by Prague Czechs to preserve their group identity differ from those used in rural areas where immigrant populations were the majority? In addressing these and other questions, From Praha to Prague reveals the unique path that Prague Czechs took toward Americanization.

Books similiar to From Praha to Prague: Czechs in an Oklahoma Farm Town

List of All Editions of From Praha to Prague: Czechs in an Oklahoma Farm Town