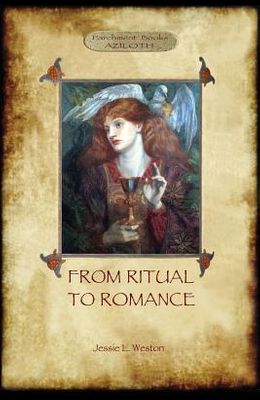 From Ritual to Romance: The True Source of the Holy Grail (Aziloth Books)

From Ritual to Romance is Jessie Weston's landmark study of the legends surrounding the mysterious Holy Grail. Weston studied medieval literature under Professor Bruno Gaston Paris and, as an independent scholar, was less hide-bound in her thinking than most tenured academics. After extensive study she rejected the prevailing consensus: that the Grail was simply a courtly work of imagination with no historical antecedents. Instead, Weston put forward the idea that the Arthurian legend of the Grail is a continuation of prehistoric Vegetation/Fertility rituals that manifested, in Classical times, as Mithraism and the 'Dying Gods' such as Adonis, Tammuz and Attis. Drawing together such apparently disparate subjects as folk-lore, biblical commentaries, mythology, and both pagan and Christian symbology, Weston produced a coherent 'gestalt' that reveals the Grail Legend as a veiled account of pre-Christian mystery initiation. An impressive and accessible book, From Ritual to Romance is essential reading for all those interested in mythology, folk-lore, paganism, gnosticism, and the origins of the most famous of all Arthurian Legends.