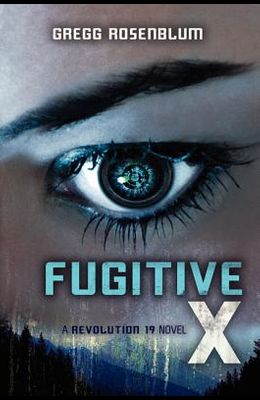 Book #2 in the Revolution 19 Series
by
Gregg Rosenblum
$11.05
Select Format

From the creators of Homeland and American Horror Story comes Fugitive X , the chilling sequel to Revolution 19 . After the robot revolution, anyone who escaped capture by the bots made their homes in secret freeposts in the wilderness outside the bot-controlled Cities. Siblings Nick, Kevin, and Cass never would have dreamed of venturing into the Cities, but when their parents are kidnapped, they have no choice but to follow them. Not everything goes as planned, though, and the siblings find themselves fleeing the city without their parents. And then the three are separated, and for the first time, they are on their own. Cass is brought in for reprogramming by the bots; Nick joins up with rebel soldiers; and Kevin meets the man who is responsible for the robot technology--and their only chance at defeating the robots once and for all. As the three fight to take down the bots, they must prepare for a looming war between bots and humans that will decide the fate of the human world forever.

From the Back Cover Our fight for freedom is humanity's last hope for survival. Siblings Nick, Kevin, and Cass are struggling to survive in a world where deadly robots have enslaved humankind. Attacked by bot soldiers after escaping the robot-controlled city, the siblings are separated from each other for the first time. Their only chance of staying alive is to fight, not knowing whether they'll ever see one another again. A war between humans and robots is on the horizon, and only one side will survive. But what the siblings don't know is that their movements are being closely monitored, and Nick, Kevin, and Cass are more important to the bots than they ever could have imagined. . . .