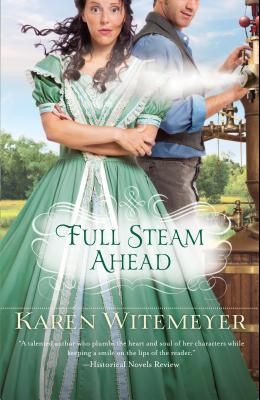 Book #1 in the Full Steam Ahead Series
by
Karen Witemeyer

Witemeyer Is the New Big Name in Historical Romance When Nicole Renard returns home to Galveston from an eastern finishing school, she's stunned to find her father in ill health. Though she loves him, he's only ever focused on what she's not. Not male. Not married. Not able to run their family business, Renard Shipping. Vowing to secure a suitable marriage partner, Nicole sets out with the Renard family's greatest treasure: a dagger personally gifted to Nicole's father by the pirate Jean Lafitte. Many believe the legend that the dagger is the source of all Renard Shipping's good fortune, though Nicole is sure her father's work ethic and honorable business practices are the keys to their success. Before she can board the steamer to New Orleans, Nicole finds her father's rivals--the Jenkins brothers--on either side of the gangplank, ready to grab her and steal the dagger. Quickly, she decides to instead travel north, to Liberty, Texas, where she can decide what to do next. Darius Thornton needs a secretary--someone to help him get his notes in order. Ever since the boiler explosion aboard the Louisiana, Darius has been a man obsessed. He will do anything to stop even one more steamship disaster. The pretty young socialite who applies for the job baffles him with her knowledge of mathematics and steamships. He decides to take a risk and hire her, but he's determined her attractive face and fancy clothes won't distract him from his important research. The job offer comes at exactly the right time for Nicole. With what Darius is paying her, she'll be able to afford passage to New Orleans in mere weeks. But Mr. Thornton is so reclusive, so distant, so unusual. He can create complex scientific equations but can't remember to comb his hair. And his experiments are growing more and more dangerous. Still, there are undeniable sparks of attraction between them. But Nicole is leaving soon, and if she marries, it must be to a man who can manage a shipping empire. Darius certainly doesn't fit that description. And the Jenkins brothers have not given up on kidnapping Nicole and seizing the Lafitte dagger for themselves.

From the Back Cover When love simmers between a reclusive scientist and a wealthy debutante, will they abandon ship or is it full steam ahead? Nicole Renard returns home to Galveston, Texas, to find her father deathly ill. Though she loves him, Nicole's father has always focused on what she's not. Not male. Not married. Not able to run Renard Shipping. Vowing to find a suitable husband to give her father the heir he desires before it's too late, Nicole sets out with the Renard family's greatest treasure as her dowry: the highly coveted Lafitte Dagger. But her father's rivals come after the dagger, forcing a change in Nicole's plans. After a boiler explosion aboard the Louisiana nearly took his life, Darius Thornton has been a man obsessed. He will do anything to stop even one more steamship disaster. Even if it means letting a female secretary into his secluded world. Nicole is determined not to let her odd employer scare her off with his explosive experiments, yet when respect and mutual attraction grow between them, a new fear arises. How can she acquire an heir for her father when her heart belongs to another? And when her father's rivals discover her hiding place, will she have to choose between that love and her family's legacy? Witemeyer's latest is full-steam-ahead good! Readers will appreciate the research the author has done to give her story depth and give her characters added dimension. They will also enjoy the solid storyline, mystery elements and humorous moments. -RT Book Reviews

Full Steam Ahead Series In Order - By Karen Witemeyer