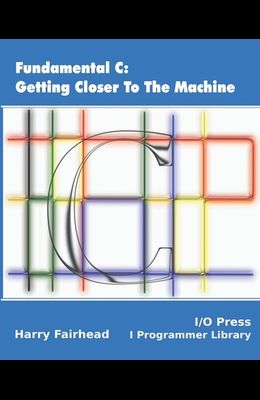 Fundamental C: Getting Closer To The Machine

C is a good language to learn. It was designed to do a very different job from most modern languages and the key to understanding it is not to just understand the code, but how this relates to the hardware. Fundamental C takes an approach that is close to the hardware, introducing addresses, pointers, and how things are represented using binary. An important idea is that everything is a bit pattern and what it means can change. As a C developer you need to think about the way data is represented, and Harry Fairhead encourages this. He emphasizes the idea of modifying how a bit pattern is treated using type punning and unions. This power brings with it the scourge of the C world - undefined behavior - which is ignored in many books on C. Here, not only is it acknowledged, it is explained together with ways to avoid it. A particular feature of the book is the way C code is illustrated by the assembly language it generates. This helps you understand why C is the way it is. For beginners, the book covers installing an IDE and GCC before writing a Hello World program and then presents the fundamental building blocks of any program - variables, assignment and expressions, flow of control using conditionals and loops. Once the essentials are in place, data types are explored before looking at arithmetic and representation. Harry then goes deeper into evaluating expressions before looking at functions and their scope and lifetime. Arrays, strings, pointers and structs are covered in separate chapters, as is bit manipulation, a topic that is key to using C, and the idea of a file as the universal approach to I/O. Finally, he looks at the four stages of compilation of a C program, the use of static and dynamic libraries and make. This is C as it was always intended to be written - close to the metal. Harry Fairhead has a hardware background and, having worked with microprocessors and electronics in general, for many years, he is an enthusiastic proponent of the IoT. His recent titles include Raspberry Pi IoT in C and Micro: bit IoT in C. His next, Applying C For The IoT With Linux at intermediate/advanced level is intended as a companion to this book for those working in a Linux/POSIX environment, in particular the Raspberry Pi.