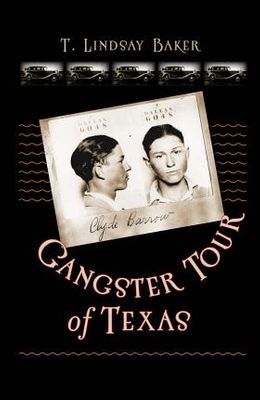 Bonnie and Clyde, Machine Gun Kelly, the Newton Boys, the Santa Claus Bank Robbers. . . . During the era of gangsters and organized crime, Texas hosted its fair share of guns and gambling, moonshine and morphine, ransom and robbery. The state's crime wave hit such a level that in 1927 the Texas Bankers Association offered a reward of $5,000 for a dead bank robber; no reward was given for one captured alive. Veteran historian T. Lindsay Baker brings his considerable sleuthing skills to the dark side, leading readers on a fascinating tour of the most interesting and best preserved crime scenes in the Lone Star State. Gangster Tour of Texas traces a trail of crime that had its beginnings in 1918, when the Texas legislature outlawed alcohol, and persisted until 1957, when Texas Rangers closed down the infamous casinos of Galveston. Baker presents detailed maps, photographs of criminals, victims, and law officers, and pictures of the crime scenes as they appear today. Steeped in solid historical research, including personal visits by the author to every site described in the book, this volume offers entertaining and informative insights into a particularly lawless period in our nation's history. Readers interested in true crime, regional history, or this unique aspect of heritage tourism will derive hours of enjoyment as they follow--on the road or from their armchairs--the trail of both cops and robbers in Gangster Tour of Texas . Baker knows how to spin a yarn that keeps his readers engrossed; knows that it does history no harm to write it so folks will enjoy many illustrations, maps, and pictures of outlaws, lawmen, victims, witnesses, and crime scenes that accompany each story. Plus, his picture captions are as informative as his story narratives.--Bill Neal, author, Getting Away with Murder on the Texas Frontier