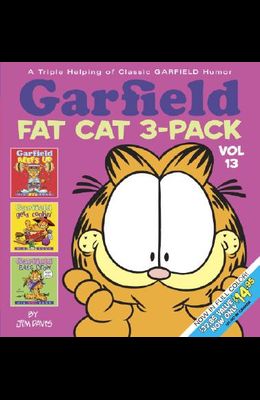 This uproarious collection includes three books in one: Garfield Beefs Up, Garfield Gets Cookin', and Garfield Eats Crow . He used to be perfect, but now he's even better Garfield, the fat cat with the super-sized ego, is back in the spotlight, dissing his dimwitted owner Jon--even pilfering his pants. Some cats chase mice; Garfield prefers to take legal action. When down on the farm, the city kitty puts up with--and puts down--Jon and his barnyard brother. No wonder Garfield's often in a bad mood. But no matter what, he's always in the mood for food The GARFIELD FAT CAT 3-PACK series collects the GARFIELD comic-strip compilation books in a new, full-color format. Garfield may have gone through a few changes, but one thing has stayed the same: his enormous appetite for food and fun. So enjoy some super sized laughs with the insatiable cat, because too much fun is never enough

List of All Editions of Garfield Fat Cat 3-Pack #13: A Triple Helping of Classic Garfield Humor