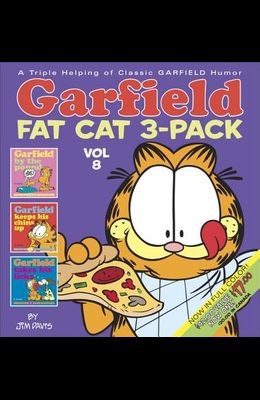 This fun-filled collection includes three books in one: Garfield By the Pound, Garfield Keeps His Chins Up, and Garfield Takes His Licks . Garfield loves food. Whether he's smothering a steak with whipped cream or chasing a runaway donut, the grand gourmand is always in his gluttonous glory As much as Garfield loves to eat, he hates to diet. The tubby tabby must suffer insults from the talking scale and the indignity of diet cat food called Hey, Fatso. Eat This But feat not; Garfield always rebounds with a witty wisecrack or a well-placed smack to the back of Jon's head. Dig in and gobble up this savory selection of fat cat comics The GARFIELD FAT CAT 3-PACK series collects the GARFIELD comic-strip compilation books in a new, full-color format. Garfield may have gone through a few changes, but one thing has stayed the same: his enormous appetite for food and fun. So enjoy some supersized laughs with the insatiable cat, because too much fun is never enough

List of All Editions of Garfield Fat Cat 3-Pack, Volume 8