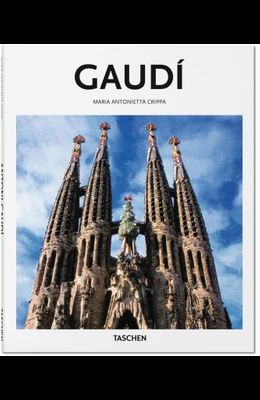 God's architect: Gaudi's ravishing symbiosis between built environment and natural world From the towering Sagrada Familia to the shimmering, textured facade of Casa Batllo and the enchanting landscape of Park Guell , it's easy to see why Antoni Gaudi (1852-1926) gained the epithet God's architect. With fluid forms and mathematical precision, his work extols the wonder of natural creation: columns soar like tree trunks, window frames curve like flowering branches, and ceramic tiling shimmers like scaly, reptilian skin. With this outstanding attention to natural detail, his inspirations from both neo-Gothic and Orientalist aesthetics, and a lifelong commitment to Catalan identity, Gaudi created a unique brand of the Modernista movement which transformed, and defines, Barcelona's cityscape. With seven of Gaudi's projects listed as UNESCO World Heritage Sites , this book introduces the architect's extraordinary vision and unique legacy, exploring the influences and the details which allow his buildings to impress, inspire, and amaze, one century after their construction. About the Series: Each book in TASCHEN's Basic Architecture Series features: an introduction to the life and work of the architect the major works in chronological order information about the clients, architectural preconditions as well as construction problems and resolutions a list of all the selected works and a map indicating the locations of the best and most famous buildings approximately 120 illustrations (photographs, sketches, drafts and plans)