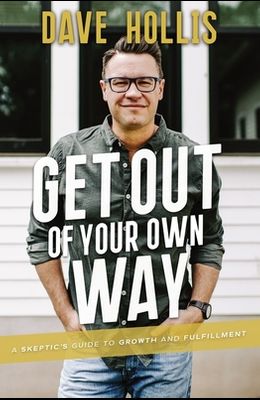 Get Out of Your Own Way: A Skeptic's Guide to Growth and Fulfillment

Dave Hollis, CEO of the Hollis Co. and husband of #1 New York Times bestselling author Rachel Hollis, refutes the lies many men believe but don't talk about, topples the phony ideas about what real men do, and points the way for men to finally start living the best versions of their lives. When Rachel Hollis began writing the #1 New York Times bestseller Girl, Wash Your Face , her husband Dave bristled at her transparency about her self-deceptions. Then he had a revelation: women aren't the only ones who believe lies. Men also buy into a host of lies that keep them from reaching their potential--and do so against ingrained ideas about how real men should or shouldn't act, reach for help, or show up. Dave knows this personally. He believed all the lies, too, and found himself stuck in a rut, waking up unmotivated, unfulfilled, and a version of himself that he didn't like. Then, he began to wake up. In his new book, he talks honestly about topics men aren't normally honest about--his impulse to solve instead of listen, his struggle to accept help or admit he needs it, even his insecurities about being a dad. Unpacking the untruths he once believed, he reveals how those lies held him back and outlines the tools that helped him change his life. Offering encouragement, challenge, and a hundred moments to laugh at himself, Dave points the way for others to drop bogus ideas and finally start living the best versions of their lives too.