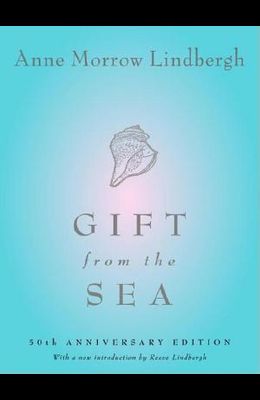 In time for the holiday season--in an appropriate and enticing new format, and with a striking new jacket--a spectacular hardcover reissue of one of the most beloved books of our time. Since it was first published in 1955, Gift from the Sea has enlightened and offered solace to readers on subjects from love and marriage to peace and contentment.

From the front Cover In this inimitable, beloved classic--graceful, lucid and lyrical--Anne Morrow Lindbergh shares her meditations on youth and age; love and marriage; peace, solitude and contentment as she set them down during a brief vacation by the sea. Drawing inspiration from the shells on the shore, Lindbergh's musings on the shape of a woman's life bring new understanding to both men and women at any stage of life. A mother of five, an acclaimed writer and a pioneering aviator, Lindbergh casts an unsentimental eye on the trappings of modernity that threaten to overwhelm us: the time-saving gadgets that complicate rather than simplify, the multiple commitments that take us from our families. And by recording her thoughts during a brief escape from everyday demands, she helps readers find a space for contemplation and creativity within their own lives. With great wisdom and insight Lindbergh describes the shifting shapes of relationships and marriage, presenting a vision of life as it is lived in an enduring and evolving partnership. A groundbreaking, best-selling work when it was originally published in 1955, Gift from the Sea continues to be discovered by new generations of readers. With a new introduction by Lindbergh's daughter Reeve, this fiftieth-anniversary edition will give those who are revisiting the book and those who are coming upon it for the first time fresh insight into the life of this remarkable woman. The sea and the beach are elements that have been woven throughout Anne Morrow Lindbergh's life. She spent her childhood summers with her family on a Maine island. After her marriage to Charles Lindbergh in 1929, she accompanied him on his survey flights around the NorthAtlantic to launch the first transoceanic airlines. The Lindberghs eventually established a permanent home on the Connecticut coast, where they lived quietly, wrote books and raised their family. After the children left home for lives of their own, the Lindberghs traveled extensively to Africa and the Pacific for environmental research. For several years they lived on the island of Maui in Hawaii, where Charles Lindbergh died in 1974. Anne Morrow Lindbergh spent her final years in her Connecticut home, continuing her writing projects and enjoying visits from her children and grand-children. She died on February 7, 2001, at the age of ninety-four. Reeve Lindbergh is the author of many books for both adults and children, including the memoirs Under a Wing and No More Words.