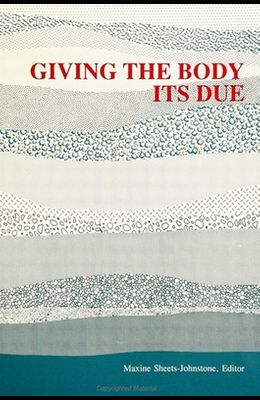 Giving the Body Its Due

These essays bring together disciplinary understandings of what it is to be the bodies we are. In its own way, each essay calls into question certain culturally-embedded ways of valuing the body which deride or ignore its role in making us human. These ways have remained virtually unchanged since Descartes in the seventeenth century first sharply divided mind--a thinking substance, from the body--an extended substance. The legacy of this Cartesian metaphysics has been to reduce the body by turns to a static assemblage of parts and to a dumb show of movement. It has both divided the fundamental integrity of creaturely life and depreciated the role of the living body in knowing and making sense of the world, in learning, in the creative arts, and in self- and interpersonal understandings. The living sense of the body and its capacity for sense-making have indeed been blotted out by top-heavy concerns with brains, minds, and language, as if these existed without a body. It is this conception of the body as mere handmaiden to the privileged that the contributors to this book challenge. By the evidence they bring forward, they help restore what is properly due the body since Descartes convinced us that mind and body are separate, and that mind is the primary value. Moreover, they help to elucidate what is properly due the body since the more recent twentieth-century western emphasis upon vision effectively reduced the richness of the affective and tactile-kinesthetic body--the body of felt experience--to a simple sum of sensations. Dominant themes that run throughout the essays and that call our attention to the living sense of the body and its capacity for sense-making are: wholeness, the capacity for self-healing, cultural histories of the body, pan-cultural bodily invariants, thinking, emotions, and the body's wisdom. In the end, these themes show that giving the body its due means forging a metaphysics that upholds the truths of experience.