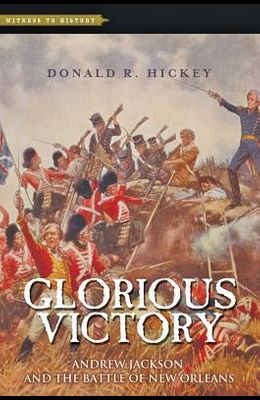 Glorious Victory: Andrew Jackson and the Battle of New Orleans

Part of the Witness to History Series
by
Donald R Hickey
$9.55
Select Format

Whether or not the United States won the war of 1812, two engagements that occurred toward the end of the conflict had an enormous influence on the development of American identity: the successful defenses of the cities of Baltimore and New Orleans. Both engagements bolstered national confidence and spoke to the lan of citizen soldiers and their militia officers. The Battle of New Orleans--perhaps because it punctuated the war, lent itself to frontier mythology, and involved the larger-than-life figure of Andrew Jackson--became especially important in popular memory. In Glorious Victory , leading War of 1812 scholar Donald R. Hickey recounts the New Orleans campaign and Jackson's key role in the battle. Drawing on a lifetime of research, Hickey tells the story of America's forgotten conflict. He explains why the fragile young republic chose to challenge Great Britain, then a global power with a formidable navy. He also recounts the early campaigns of the war--William Hull's ignominious surrender at Detroit in 1812; Oliver H. Perry's remarkable victory on Lake Erie; and the demoralizing British raids in the Chesapeake that culminated in the burning of Washington. Tracing Jackson's emergence as a leader in Tennessee and his extraordinary success as a military commander in the field, Hickey finds in Jackson a bundle of contradictions: an enemy of privilege who belonged to Tennessee's ruling elite, a slaveholder who welcomed free blacks into his army, an Indian-hater who adopted a native orphan, and a general who lectured his superiors and sometimes ignored their orders while simultaneously demanding unquestioning obedience from his men. Aimed at students and the general public, Glorious Victory will reward readers with a clear understanding of Andrew Jackson's role in the War of 1812 and his iconic place in the postwar era.

Witness to History Series In Order - By Donald R Hickey

Books similiar to Glorious Victory: Andrew Jackson and the Battle of New Orleans

List of All Editions of Glorious Victory: Andrew Jackson and the Battle of New Orleans