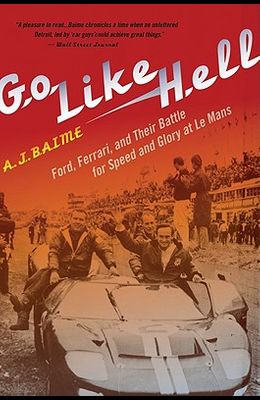 Go Like Hell: Ford, Ferrari, and Their Battle for Speed and Glory at Le Mans

The epic story also told in the film FORD V. FERRARI: By the early 1960s, the Ford Motor Company, built to bring automobile transportation to the masses, was falling behind. Young Henry Ford II, who had taken the reins of his grandfather's company with little business experience to speak of, knew he had to do something to shake things up. Baby boomers were taking to the road in droves, looking for speed not safety, style not comfort. Meanwhile, Enzo Ferrari, whose cars epitomized style, lorded it over the European racing scene. He crafted beautiful sports cars, science fiction on wheels, but was also called the Assassin because so many drivers perished while racing them. Go Like Hell tells the remarkable story of how Henry Ford II, with the help of a young visionary named Lee Iacocca and a former racing champion turned engineer, Carroll Shelby, concocted a scheme to reinvent the Ford company. They would enter the high-stakes world of European car racing, where an adventurous few threw safety and sanity to the wind. They would design, build, and race a car that could beat Ferrari at his own game at the most prestigious and brutal race in the world, something no American car had ever done. Go Like Hell transports readers to a risk-filled, glorious time in this brilliant portrait of a rivalry between two industrialists, the cars they built, and the pilots who would drive them to victory, or doom.

Books similiar to Go Like Hell: Ford, Ferrari, and Their Battle for Speed and Glory at Le Mans

List of All Editions of Go Like Hell: Ford, Ferrari, and Their Battle for Speed and Glory at Le Mans