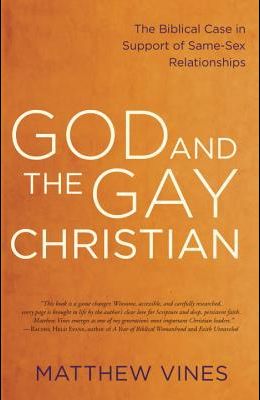 God and the Gay Christian: The Biblical Case in Support of Same-Sex Relationships

The landmark book exploring what the Bible actually says--and doesn't say--about same-sex relationships. As a young Christian man, Matthew Vines harbored the same basic hopes of most young people: to some-day share his life with someone, to build a family of his own, to give and receive love. But when he realized he was gay, those hopes were called into question. The Bible, he'd been taught, condemned gay relationships. Feeling the tension between his understanding of the Bible and the reality of his same-sex orientation, Vines devoted years of intensive research into what the Bible says about homosexuality. With care and precision, Vines asked questions such as: - Do biblical teachings on the marriage covenant preclude same-sex marriage or not? - How should we apply the teachings of Jesus to the gay debate? - Can celibacy be a calling when it is mandated, not chosen? - What did Paul have in mind when he warned against same-sex relations? Unique in its affirmation of both an orthodox faith and sexual diversity, God and the Gay Christian has sparked heated debate, sincere soul search&shy;ing, and widespread cultural change on the issue of what it means to be a faithful gay Christian.

Books like God and the Gay Christian: The Biblical Case in Support of Same-Sex Relationships

List of All Editions of God and the Gay Christian: The Biblical Case in Support of Same-Sex Relationships