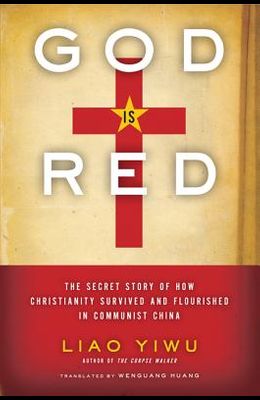 God is Red: The Secret Story of How Christianity Survived and Flourished in Communist China

In God is Red , Chinese dissident journalist and poet Liao Yiwu--once lauded, later imprisoned, and now celebrated author of For a Song and a Hundred Songs and The Corpse Walker --profiles the extraordinary lives of dozens of Chinese Christians, providing a rare glimpse into the underground world of belief that is taking hold within the officially atheistic state of Communist China. Liao felt a kinship with Chinese Christians in their unwavering commitment to the freedom of expression and to finding meaning in a tumultuous society, even though he is not a Christian himself. This is a fascinating tale of otherwise unknown personalities thriving against all odds. God is Red will resonate with readers of Phillip Jenkins' The Lost History of Christianity and Peter Hessler's Country Driving .

From the Back Cover When journalist Liao Yiwu first stumbled upon a vibrant Christian community in the officially secular China, he knew little about Christianity. In fact, he'd been taught that religion was evil, and that those who believed in it were deluded, cultists, or imperialist spies. But as a writer whose work has been banned in China and has even landed him in jail, Liao felt a kinship with Chinese Christians in their unwavering commitment to the freedom of expression and to finding meaning in a tumultuous society. Unwilling to let his nation lose memory of its past or deny its present, Liao set out to document the untold stories of brave believers whose totalitarian government could not break their faith in God, including: The over-100-year-old nun who persevered in spite of beatings, famine, and decades of physical labor, and still fights for the rightful return of church land seized by the government The surgeon who gave up a lucrative Communist hospital administrator position to treat villagers for free in the remote, mountainous regions of southwestern China The Protestant minister, now memorialized in London's Westminster Abbey, who was executed during the Cultural Revolution as an incorrigible counterrevolutionary This ultimately triumphant tale of a vibrant church thriving against all odds serves as both a powerful conversation about politics and spirituality and a moving tribute to China's valiant shepherds of faith, who prove that a totalitarian government cannot control what is in people's hearts.