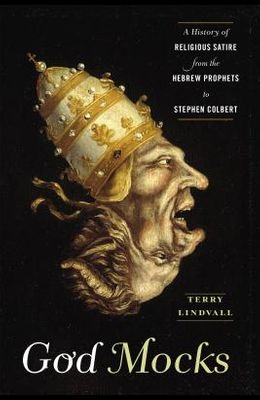 God Mocks: A History of Religious Satire from the Hebrew Prophets to Stephen Colbert

Winner of the 2016 Religious Communication Association Book of the Year Award In God Mocks , Terry Lindvall ventures into the muddy and dangerous realm of religious satire, chronicling its evolution from the biblical wit and humor of the Hebrew prophets through the Roman Era and the Middle Ages all the way up to the present. He takes the reader on a journey through the work of Chaucer and his Canterbury Tales, Cervantes, Jonathan Swift, and Mark Twain, and ending with the mediated entertainment of modern wags like Stephen Colbert. Lindvall finds that there is a method to the madness of these mockers: true satire, he argues, is at its heart moral outrage expressed in laughter. But there are remarkable differences in how these religious satirists express their outrage.The changing costumes of religious satirists fit their times. The earthy coarse language of Martin Luther and Sir Thomas More during the carnival spirit of the late medieval period was refined with the enlightened wit of Alexander Pope. The sacrilege of Monty Python does not translate well to the ironic voices of Soren Kierkegaard. The religious satirist does not even need to be part of the community of faith. All he needs is an eye and ear for the folly and chicanery of religious poseurs. To follow the paths of the satirist, writes Lindvall, is to encounter the odd and peculiar treasures who are God's mouthpieces. In God Mocks , he offers an engaging look at their religious use of humor toward moral ends.