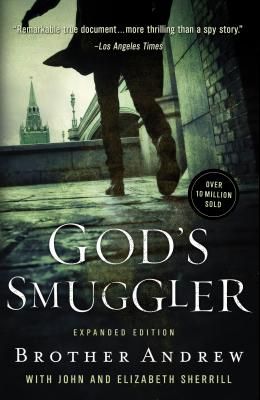 by
Brother Andrew and John Sherrill and Elizabeth Sherrill

A True-Life Thriller That Will Leave You Breathless In the anniversary edition of this electrifying real-life story, readers are gripped from the first page by the harrowing account of a young man who risked his life to smuggle Bibles through the borders of closed nations. Now, sixty years after Brother Andrew first prayed for God's miracle protection, this expanded edition of a classic work encourages new readers to meet this remarkable man and his mission for the first time. Working undercover for God, a mission that continues to this day, has made Brother Andrew one of the all-time heroes of the faith. His narrow escapes from danger to share the love of Jesus will encourage and embolden believers in their own walks of faith.

From the Back Cover A true-life thriller that will leave you breathless! As a boy Brother Andrew dreamed of being an undercover spy working behind enemy lines. As a man he found himself working undercover for God. His was a mission filled with danger, financed by faith and supported by miracles. In this expanded edition, Brother Andrew's electrifying real-life story of smuggling Bibles into the most dangerous places on earth will grip readers all over again and inspire a new generation to step out on their own journeys of faith. Plus, a brand-new interview with Brother Andrew reveals behind-the-scenes information and fascinating insights into current events that are riveting the world. Sixty years after his first perilous trip, Brother Andrew's legacy continues, making him one of the all-time heroes of the faith. This harrowing account of his narrow escapes and amazing adventures will bring you to the edge of your seat--and to a bold new level of faith. Now includes photos and a new epilogue from Brother Andrew on 60 years of ministry! Brother Andrew began taking Bibles to Christians behind closed borders in 1955. His ministry, which continues today, is known as Open Doors International. He is the author of numerous books and makes his home in the Netherlands.