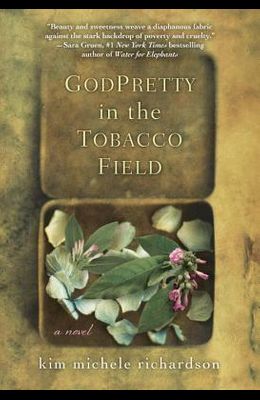 Godpretty in the Tobacco Field

Beauty and sweetness weave a diaphanous fabric against the stark backdrop of poverty and cruelty. --Sara Gruen, bestselling author of Water for Elephants Nameless, Kentucky, in 1969 is a hardscrabble community where jobs are few and poverty is a simple fact--just like the hot Appalachian breeze or the pests that can wipe out a tobacco field in days. RubyLyn Bishop is luckier than some. Her God-fearing uncle, Gunnar, has a short fuse and high expectations, but he's given her a good home ever since she was orphaned at the age of five. Yet now, a month shy of her sixteenth birthday, RubyLyn itches for more. Maybe it's something to do with the paper fortunetellers RubyLyn has been making for townsfolk, each covered with beautifully wrought, prophetic drawings. Or perhaps it's because of Rainey Ford, an African-American neighbor who works alongside her in the tobacco field, and with whom she has a kinship, despite her uncle's worrisome shadow and the town's disapproval. RubyLyn's predictions are just wishful thinking, not magic at all, but through them she's imagining life as it could be, away from the prejudice and hardship that ripple through Nameless. Atmospheric, poignant, and searingly honest, GodPretty in the Tobacco Field follows RubyLyn through the course of one blazing summer, as heartbreaking revelations and life-changing decisions propel her toward a future her fortunetellers never predicted. Praise for GodPretty in the Tobacco Field Richardson's deft second novel paints a picture of hard life and bright dreams...Richardson's skill fully develops RubyLyn's plight. -- Publishers Weekly Setting is everything...The reader learns a great deal about the impact of President Johnson's War on Poverty in rural Kentucky and, equally, about the place of women in that society in the late 60's...Sympathetic characters whom readers will wish a happy ending. -- Booklist Kim Michele Richardson aptly portrays the impoverished life of the hill people with her images of the beauty yet hardship of the mountains as well as the way this particular world experienced discrimination in the sixties. -- The New York Journal of Books