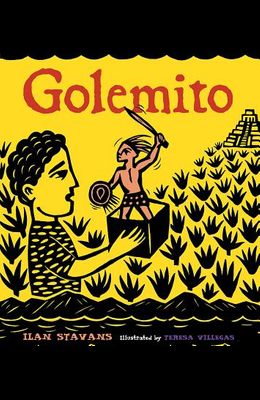 by
Ilan Stavans and Teresa Villegas

Originally published in the children's magazine Cricket, Golemito is the story of how a couple of Jewish boys in Mexico City confront bullying by creating a Golem, the mythical creature of Jewish folklore, originally made by Rabbi Lowe, known as the Maharal of Prague, in the sixteenth century, to defend the city's Jewish community from anti-Semitic attacks. Sammy Nurko, along with the story's narrator, conjure an Aztec version of the Golem that is minute in size and responds to enchanting Nahuatl poetry. Written by internationally renowned, prize-winning author Ilan Stavans and illustrated by Teresa Villegas, Golemito is both an endearing tale of courage and redemption and an enthralling fusion of the Jewish and Latino traditions.