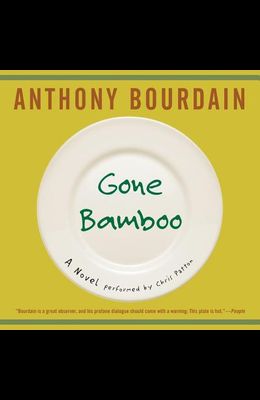 by
Anthony Bourdain and Chris Patton

Gone Bamboo pits Henry, a CIA-trained assassin, and Frances, his hard-nosed, hard-bodied wife against two governments and a cross-dressing mafioso. Henry and Frances have gone bamboo--living an idyllic, retired life in the Caribbean--but when Donnie, a powerful capo relocated by the Federal Witness Protection Program, inadvertently jeopardizes their plan, all hell breaks loose. Despite the fact that Henry once tried to kill Donnie, the two join forces against the transvestite mob boss looking to ace Donnie. But things aren't going to be so easy ...Written in Anthony Bourdain's signature style-raucous, funny, a bit vicious, and always fun-Gone Bamboo is a feast of murder, hitmen, and the hitwomen they love. Reminiscent of Dashiell Hammet's Nick and Nora, Bourdain's Henry and Frances are a tough-talking, unlikely couple that will win you over-if they don't kill you first.