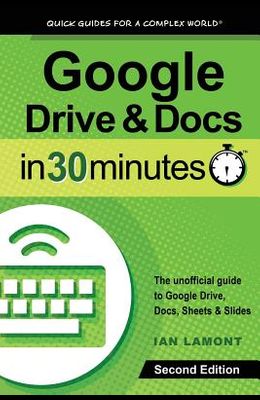 All-new 2nd Edition of this popular Google Drive and Google Docs tutorial, updated in 2018 Do you have 30 minutes to spare? It's all you'll need to get up to speed with Google Drive, Google Docs, Google Sheets, and Google Slides, the free online productivity suite and Microsoft Office alternative. Millions of people use the software every day on their computers and mobile devices. You, too, can use Drive, Docs, Sheets, and Slides to perform the following tasks: Write reports and letters with Google Docs Crunch numbers and create online data entry forms using Google Sheets and Google Forms Use the Google Drive app and the Google Docs app on your Android phone or tablet, or iPhone or iPad to create and edit files on the go Give presentations online or on your phone or tablet with Google Slides Collaborate online with classmates and colleagues Convert Microsoft Office documents to Google formats, and vice versa Perform limited editing of Microsoft Word, Excel, and PowerPoint documents Print documents, drawings, and spreadsheets using Google Cloud Print Revert to earlier versions of files using Google Drive Export PDFs Make pie charts, bar charts, and simple tables Use Google Forms to gather data Publish documents and spreadsheets online The second edition of this popular guide covers the new Google Drive basics as well as the updated mobile and desktop interfaces for Docs, Sheets, and Slides. There are new sections on Google Forms and Google Sites. The tone of this Google Drive book is friendly and easy to understand, with lots of step-by-step instructions and examples and nearly 50 screenshots. The guide can be used by anyone with a PC, Mac, or Chromebook. Google Drive & Docs In 30 Minutes also includes instructions for using Drive, Docs, Sheets, and Slides on iPhones, iPads, and Android phones and tablets. In addition to serving as a solid introduction to new users, it's a great reference manual for more experienced users as well as for people making the transition from Microsoft Office, not to mention teachers using Google Drive for education and Google Docs in the classroom. It includes a glossary of keyboard shortcuts, as well as sections on document formatting, organizing and syncing files, offline documents, collaboration, and Office Compatibility Mode for Microsoft Office documents.

0
|   0  reviews
Did you read Google Drive and Docs in 30 Minutes (2nd Edition): The unofficial guide to Google Drive, Docs, Sheets & Slides? Please provide your feedback and rating to help other readers.
Write Review

List of All Editions of Google Drive and Docs in 30 Minutes (2nd Edition): The unofficial guide to Google Drive, Docs, Sheets & Slides