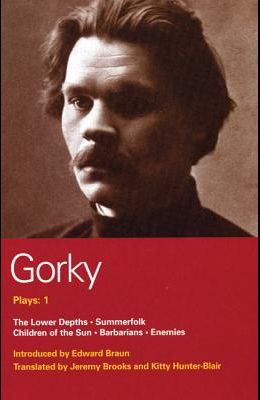 Modern accurate and stageable translations of five of Gorky's plays This volume includes Gorky's major works for the theatre. The Lower Depths, first staged by the Moscow Art theatre in 1902, portrays a cast of down and outs living in the underbelly of Russian society; Summerfolk depicts a society after the disintegration of feudalism with a new class of businessmen, intellectuals and professionals. Children of the Sun was completed in prison in 1905 and premiered in St Petersburg in the same year, St Petersburg critic Alexander Kugel wrote: If Summerfolk boxed the ears of the intelligentsia, the Children of the Sun spits in their face; Barbarians looks at the tragedy of an individual caught between opposing forces in a society on the brink of revolution - Lenin's future Minister of Culture, Alexander Kugel wrote: Gorky helps us to understand and assess the mighty phenomenon of this war between two forms of barbarism through the direct experience of real people; Enemies looks at the struggle between workers and industrialists and has been described as the missing link between Chekhov and the Russian revolution (Observer)