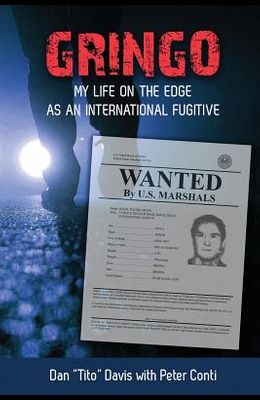 Gringo: My Life on the Edge As an International Fugitive

Dan Tito Davis comes from a town in South Dakota that's so small everyone knows their neighbor's cat's name. But once he got out, he made some noise. While at the University of Nevada-Las Vegas, he started manufacturing White Crosses, aka speed, and soon had the Banditos Motorcycle Club distributing ten million pills a week. After serving a nickel, he got into the weed game, but just when he got going, he was set up by a childhood friend. Facing thirty years, Davis slipped into Mexico, not knowing a word of Spanish, which began a thirteen-year odyssey that led him to an underground hideout for a MedellIn cartel, through the jungles of the Darien Gap, the middle of Mumbai's madness, and much more. We've known for quite a while that Peter Conti is able to capture the essence of American culture, especially the streets, dead on. With Gringo, we see that Conti writes equally as well about such diverse locals as a post-Escobar MedellIn, the jungles of the Darien Gap, and the swarm of humanity in Mumbai. He introduces us to a wide range of characters including a Bandito named Fonzie, a hit woman who moonlights as a tutor, a chemistry nerd, and the heads of some of the most powerful cartels in Latin America. But the most impressive is Conti's portrayal of Dan Davis, the South Dakotan pot trafficker who we follow through these dangerous terrains as he tries to stay one step ahead of the feds and federales. -Michael Corrente, Federal Hill and Brooklyn Rules Peter Conti's writing is crisp, sharp, and has a sting. There's an underlying sense of danger throughout this book. He writes as if his fingers are bullets. -Buddy Giovinazzo, Life is Always Hot in Cracktown From millions of dollars lost, just as quickly as gained, to repeating the third grade. . .at age forty, Dan 'Tito' Davis has lived three or four lifetimes. Peter Conti does a masterful job of weaving Davis's colorful life into a provocative page turner. -Christopher Grant, Teenie and False Start Peter Conti has written a compelling page-turner about a man on the run and out of time that takes the reader inside the dark demimonde of drug trafficking. You won't be able to put it down. -Frank Owen, Clubland and No Speed Limit Peter Conti has created a gripping tale of larceny like no other. Gringo is an enthralling look inside the drug trade and life on the run against all odds. You can literally smell the inherent sense of fear and danger jumping of the pages. A must read. -Dante Ross, Grammy-winning producer When it's done well, story-telling is an art that can shift our perspective allow us to walk through another man's reality. In this case we experience the highs and lows of a cunning marijuana trafficker and international fugitive. As a story, Gringo has it all. The fascinating life of Dan 'Tito' Davis is masterfully detailed by Peter Conti in a book that you will not be able to put down. -Slaine, La Coka Nostra and The Town Sharp and insightful, Conti takes us inside the ultimate fugitive story. You know characters like these exist in the world, but rarely do you get to travel the globe with them. -Rob Weiss, Entourage and Ballers

Frequently Asked Questions About Gringo: My Life on the Edge As an International Fugitive

Books like Gringo: My Life on the Edge As an International Fugitive

0
|   0  reviews
Did you read Gringo: My Life on the Edge As an International Fugitive? Please provide your feedback and rating to help other readers.
Write Review

List of All Editions of Gringo: My Life on the Edge As an International Fugitive