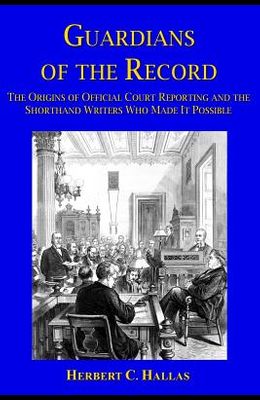 Guardians of the Record: The Origins of Official Court Reporting and the Shorthand Writers Who Made It Possible

Official court reporting in American courtrooms was brought about by the skill, dedication, and determination of a remarkable group of pioneer shorthand writers. Many of them were reformers, some were entrepreneurs, and others were inventors, writers, artists, and scientists. All of them were gifted shorthand professionals whose work made legal proceedings more reliable, more efficient, and fairer. Using a variety of sources including 19 th century newspapers, shorthand periodicals, records of shorthand associations, county histories and government reports and records, Herbert C. Hallas explains how official court reporting got its start in the United States and tells the stories of eleven pioneer court reporters whose work ensured that official court reporting would become a key component in the American pursuit of due process of law.