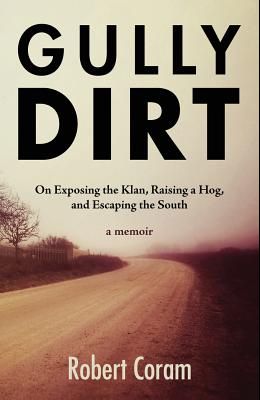 Gully Dirt: On Exposing the Klan, Raising a Hog, and Escaping the South

No part of America scars its children as does the south. In this incandescent memoir, Robert Coram tells how a rough-edged boy escaped from a nowhere little town in rural southwest Georgia and became an accomplished writer. With a flawless ear and an unblinking eye, Coram escorts us across a unique landscape, capturing the nuances of life in a small southern town during the 1950s, not by writing of the romantic south, but rather of a south that can be narrow and harsh and brutal. He takes on the big issues: race, religion, love, death, and family values. His coming-of-age story is troubling, sometimes embarrassing to read, but always hilarious. As a native son, Coram captures in pitch-perfect tone the voice of a teenage boy, a new voice from the old south--a voice as fresh and as blinding as a southern sunrise. Coram holds nothing back. No part of his early life is too embarrassing or too personal, including losing his virginity in a church and public beatings by his father. Though centered on Coram's long-suffering mother, his brutal father, and his dog that lived in hope, the main feature of his story may be the humor. Rarely does a writer draw so much humor from such a harsh childhood. His story will linger in your heart. Coram is the author of seven novels and seven works of non-fiction, including four acclaimed biographies. He lives in Atlanta.