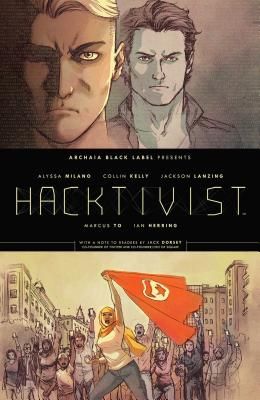 A fast-paced, ripped-from-the-headlines tech thriller from the mind of Alyssa Milano From the creative mind of Alyssa Milano, with artist Marcus To and writers Jackson Lanzing and Collin Kelly, Hacktivist is a fast-paced cyber-thriller about friendship and freedom in a time of war. The world knows Ed Hiccox and Nate Graft as the young, brilliant co-founders of YourLife, a social networking company that has changed the way the world connects with each other. The world knows sve_Urs3lf as the largest white-hat hacking group on the planet, exposing information and sparking revolutions across the globe. What the world doesn't know is that this is a lie. Ed Hiccox and Nate Graft are sve_Urs3lf. When their operation is discovered by the US Government, and their company is taken over by military contracts and CIA, Ed and Nate must face the real world beyond the code and choose between friendship and what they believe to be right.