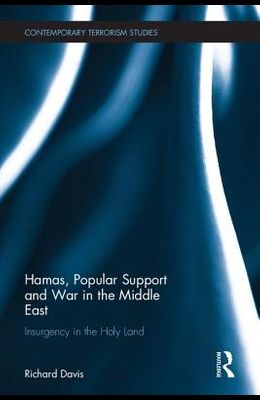 Hamas, Popular Support and War in the Middle East: Insurgency in the Holy Land

This book offers a new understanding of the nature of power-seeking insurgent groups by empirically examining the use of violence by Hamas in the Palestinian-Israeli Conflict. Though Hamas has learned to ride the tides of popular support, it remains suspended between its quest to achieve the values of its ardent supporters (reclamation of land through force) and the desire to grow popular support. This tension is reflected in how and when the group exercises violent resistance. The theoretical framework applied in this volume provides a simple construct to understand the dynamics that result in use and non-use of violence under changing environmental conditions by Hamas, but could be applied more broadly to other power-seeking insurgent groups, including ISIL. The book weaves together the dynamics between violent actions and internal and external influences on Hamas, including: expressed values of the group, Palestinian popular support measures, leaders' personalities and innovation (weapons and tactics), Israeli influence and targeted killings, peace processes and conflicts in Gaza, Syria, Iraq and Egypt. With newly assembled datasets on Hamas' violent acts and public statements, Israeli Targeted Killings, historical measures of popular support and extensive field interviews, the book offers a fresh perspective on insurgent group violence by demonstrating under what conditions the group exercises violence or refrains from doing so. This book will be of much interest to both policy makers and students of the Arab-Israeli conflict, political violence, Middle Eastern politics, security studies and international relations in general.