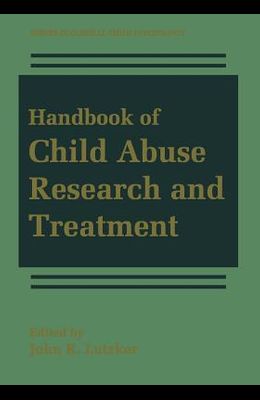 Child abuse and neglect (CAN) came to the forefront in the 1960s. At first, theories were spun, usually dealing with the intrapsychic reasons why a parent might en- gage in such terrible behavior. The 1970s brought theory that tended to deal in- creasingly with sociocultural and ecological explanations forCAN.Itwas not until the 1980s and 1990s, however, thattreatment strategies, research, and legal issues emerged. This book represents a state-of-the-art compilation from the leading figures of today's work in theory, research, and treatment. In addition, this volume presents treatises on cultural issues in CAN, youth violence, sexual abuse, and child devel- opmental factors in CAN. The topics covered in this book are based upon empirical research. Although CANhas been professionally discussed since the 1960s, empiricallybased work in the field has been somewhat scarce. Thus, this volume fills a void. It is hoped that this book can be used as a text and reference source for many disciplines. It should be useful in psychology, psychiatry, social work, public health, pediatrics, child development and early childhood education, and law. My own work in CANbegan in 1979. Since then, I have been involved in two large-scale research and service projects aimed at the treatment and prevention of CAN. I have found that the problem appears treatable and preventableif the ap- propriate resources are available. ifthe services and research are properly evalu- ated, and if staff are trained to measurable performance criteria. Again, this empirical bias can be seen throughout the volume.