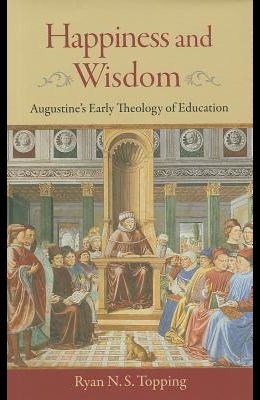 Immediately after his baptism Augustine set out to produce a Christianized version of the ancient liberal arts curriculum. By an ordered sequence of contemplation, moving from linguistic to mathematically based disciplines, Augustine suggested that study in the liberal arts could render the mind and heart docile before God. Though Augustine later would shift his focus more directly toward biblical study, his early reflections on secular learning remain an attractive and powerful model for Christian thinking about the arts. Happiness and Wisdom contributes to ongoing debates about the nature of Augustine's early development, and argues that Augustine's vision of the soul's ascent through the liberal arts is an attractive and basically coherent view of learning, which, while not wholly novel, surpasses both classical and earlier patristic renderings of the aims of education. Ryan N. S. Topping begins by embedding Augustine's educational works within the historical and philosophical context of Christian and pagan late antiquity. He then shows how Augustine's writings on education, far from being irrelevant to the trajectory of his mature thought, provide a key to interpreting many of his other explorations in ethics and epistemology. Augustine's Christianized liberal arts curriculum is vindicated as an outgrowth of his moral theology, an expression of his abiding conviction that happiness is the end of human aspiration, and that--against both Ciceronian skepticism and Manichean dualism--the created order speaks to men of the mind of God. ABOUT THE AUTHOR: Ryan N. S. Topping earned a doctorate in theology from the University of Oxford, is Pope John XXIII Chair of Studies in Catholic Theology at St. Thomas University in Canada, and is author of St. Augustine in the Continuum Library of Educational Thought series. PRAISE FOR THE BOOK: This is one of the finest studies of the early Augustine to emerge in recent years, admirable for its balance, the quality of research, and its sage judgment. Though it has implications for how we see the relationship between Augustine's work pre-391and his later work, this study asks us to pause, and to take seriously, the ideals of a period in Augustine's life when his outlook as a layman aspiring to contribute to the educational mission of the Church was his main concern. The study asks us to judge this period on its own merits, not simply by how it compares to what came later. In the process, though, we do encounter as well a very precisely balanced assessment of continuities and discontinuities, as well as intimations of Augustine's possible relevance to our own educational dilemmas. A wonderful study.--John Cavadini, University of Notre Dame Topping's book occupies a secure niche of its own . . . His detailed analysis has allowed him to contribute to debates over the interpretation of Augustine's early thought.--Raymond Canning, professor of theology, Australian Catholic University and translator of Augustine's Instructing Beginners in Faith Happiness and Wisdom is a very accessible work on Augustine's early theology of education. It is beneficial to a wide range of readership, from philosophers and theologians to educators of every type. He emphasizes the moral aspect of education, offers a textually rich argument for the necessary role of Christ's illuminating activity in order for education to be possible, and attests to the continued value of a liberal arts education. --Bibliographia