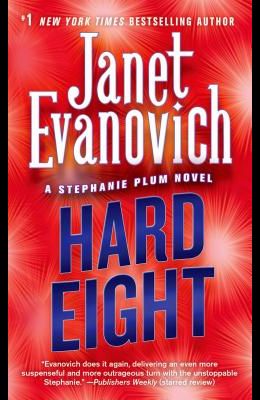 Book #8 in the Stephanie Plum Series
by
Janet Evanovich

Stephanie Plum is joined by Morelli, Ranger, Lula, Valerie, and Grandma Mazur, who find themselves on the ride of their lives, when Stephanie is hired to find a missing child. But things aren't always as they seem and Stephanie must determine if she's working for the right side of the law. Martin's Press.

From the Back Cover Hard Up Fugitive Apprehension Agent Stephanie Plum has a big problem on her hands: Seven-year-old Annie Soder and her mother, Evelyn, have disappeared. Evelyn's estranged husband, Steven, a shady owner of a seedy bar, is not at all happy. Finding a kidnapped child is not an assignment for a bounty hunter. But Evelyn's grandmother lives next door to Stephanie's parents, so Stephanie follows the trail left by Annie and Evelyn-and finds a lot more than she bargained for. Hard Risk Steven Soder is somehow linked with a very scary Eddie Abruzzi. Trenton cop and on-again, off-again fiancé Joe Morelli and Stephanie's mentor and tormentor, Ranger, warn Stephanie about Abruzzi, but it's Abruzzi's eyes and mannerisms that frighten Stephanie most. Stephanie needs Ranger's savvy and expertise, and she's willing to accept his help to find Annie even though it might mean getting too involved with Ranger. Stephanie, Ranger, Lula (who's not going to miss riding with Ranger), and Evelyn's lawyer/Laundromat manager set out to find Annie. The search turns out to be a race among Stephanie's posse, the True Blue Bonds' agent-a Rangerette known as Jeanne Ellen Burrows-and the Abruzzi crew. Plus, there's a killer rabbit on the loose! Hard Eight Strap on your helmet and get ready for the ride of your life! Hard Eight. The world of Stephanie Plum has never been wilder. Evanovich does it again, delivering an even more suspenseful and more outrageous turn with the unstoppable Stephanie. - Publishers Weekly (starred review) The things Evanovich does so well-family angst, sweet eroticism, stealth shopping, that stunning mix of terror and hilarity-are done better than ever here. - Booklist (starred review)
From the front Cover Hard Eight Keeps up Evanovich's standards for over-the-top situations - Chicago Tribune [A] must read...readers will want to finish this delightful work in one sitting.-- Midwest Book Review Offers the best action yet.- Newark Star-Ledger The girl mercenary is as fresh as ever. - People Hard Eigh t is most emphatically not Raymond Chandler but, like his work, a piece of finely crafted prose. - San Francisco Chronicle Plum is one of fiction's most irresistible heroines.- Seattle Post Intelligencer Evanovich has certainly come a long way since One for the Money ; her latest Stephanie Plum mystery merits a one-day national laydown on June 18.-- Library Journal Well plotted and cleverly resolved...her wickedly funny characterizations and the intriguing love triangle are what keep her readers coming back for more.- Bookpage As close to summer escapism as you can get. Evanovich hits a high note with her newest...a great addition to a well-stocked beach bag.- Houston Chronicle A perfect summer vacation book...promises fun, laughter, and unforgettable characters...Evanovich delivers.- Tennessean (Nashville, TN) Thrills mixed with lust, seasoned with humor: a delightful escape.- News & Record (Greensboro, NC) Evanovich produces more than beach reading. She writes rollicking, raunchy, hysterical fiction that is so real, you will laugh out loud and want to visit the Burg.- Rockwall County News Just when you think the adventures of Plum and company can't get any funnier or more convoluted, Janet Evanovich proves you wrong-nobody does it better! - Romantic Times Seven Up A madcap comic mystery-Jersey-girl style.- The New York Times Expect a laugh per page...Bottom line: Plum Pick.- People If you like your summer reads hot and sassy, try Seven Up.-Boston Herald Evanovich is the crown princess of detective fiction...Seven Up is brassy, comical, and light-hearted.-Bookpage [Seven Up is funny, sexy, scary.- Booklist Edgy romance triangle, the loopy family relationships, or the bounty-hunting jobs that skate between absurdity and genuine tension. -Denver Post An adventurous, amusing ride...billed as a crime novel, it has the requisite intrigue and chase scenes, but is also seasoned with humor.-O akland Press (Pontiac, MI) [A] fast, funny, and first-rate tale.- Ft. Myers News Press Romantic and laugh-out-loud funny, this caper is the perfect summer antidote to serious reading. -St. Louis Post-Dispatch The dialogue's snappy...the pace is quick...Evanovich's great gift is an ability to create situations zany enough to provoke bursts of laughter.- Philadelphia Inquirer Marked by wise-cracking humor, eccentric characters, and a gritty urban New Jersey setting...Evanovich's 'Stephanie Plum' series attracts an ever-increasing number of fans with each book. -Library Journal Loads of fun...with laughs on every page.- USA Today Evanovich continues...her successful formula...[she] provides a beginning that illustrates all that is right with this series and an ending that ties the story together, gives us a dose of reality, and leaves us with a cliffhanger. -Chicago Tribune