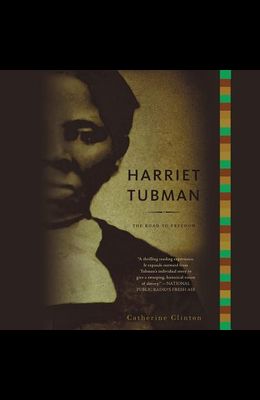 by
Catherine Clinton and Shayna Small

Who was Harriet Tubman? To John Brown, the leader of the Harpers Ferry slave uprising, she was General Tubman. For those slaves whom she led north to freedom, she was Moses. To the slavers who hunted her down, she was a thief and a trickster. To abolitionists she was a prophet. As Catherine Clinton shows in this riveting biography, Harriet Tubman was, above all, a singular and complex woman, defeating simple categories. Illiterate but deeply religious, Harriet Tubman was raised on the Eastern Shore of Maryland in the 1820s, not far from where Frederick Douglass was born. As an adolescent, she incurred a severe head injury when she stepped between a lead weight thrown by an irate master and the slave it was meant for. She recovered but suffered from visions and debilitating episodes for the rest of her life. While still in her early twenties she left her family and her husband, a free black, to make the journey north alone. Yet within a year of her arrival in Philadelphia, she found herself drawn back south, first to save family members slated for the auction block, then others. Soon she became one of the most infamous enemies of slaveholders. She established herself as the first and only woman, the only black, and one of the few fugitive slaves to work as a conductor on the Underground Railroad. In the decade leading up to the Civil War, Tubman made over a dozen trips south in raids that were so brazen and so successful that a steep price was offered as a bounty on her head. When the Civil War broke out, she became the only woman to officially lead men into battle, acting as a scout and a spy while serving with the Union Army in South Carolina. Long overdue, Harriet Tubman: The Road to Freedom is the first major biography of this pivotal character in American history, written by an acclaimed historian of the antebellum and Civil War eras. With impeccable scholarship drawing on newly available sources and research into the daily lives of the slaves in the border states, Catherine Clinton brings Harriet Tubman to life as one of the most important and enduring figures in American history.