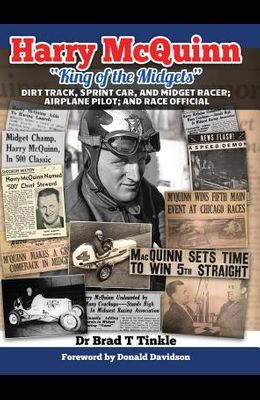 This book is a compilation of the racing career (and beyond) of Harry McQuinn who was dubbed King of the Midgets and ran with the Chicago Gang. It's an historical narrative to chronicle the information about his career and to tell the story of someone who came before and helped blaze the path in auto racing. The information has been assembled by Dr. Brad T Tinkle who, as a child, fondly remembers fishing and boating with his great grandparents, Harry and Juanita McQuinn. He recalls many of Daddy Harry's racing stories, trophies, injuries, and scars, but didn't have a true understanding of the significance of his racing career since Harry had long retired by that time. These memories didn't come to the forefront until decades later when his son, Zachary Tinkle, started his stock car racing career, which plunged Brad into learning about mechanics, car set up, and spotting. While traveling around to the different tracks, he started to notice photos of Harry at different tracks during events like Hall of Fame weekend at Grundy County Speedway. He delved into family archives, newspaper archives, and track historical records to bring Harry's stories to light. People that heencountered that knew or knew of Harry have different perspectives. Some remember him as a firm race official. Othersremember that he is the first and only person to land an airplane on the Brickyard. And, others recall his contribution to the start of NASCAR(R) because of his kicking Mr. France out of a race track. Many know the stories, but may not have necessarily known the man behind them. Included in the book are: - Early Years- McQuinn falls in love... with cars. - Dirt Track Racing (1924-1934)- McQuinn didn't have the best start to his racing career, but he persisted to become one of the best in the Midwest. - Big Car Racing (1934-1948)- Living in the shadow of the Indianapolis Speedway, he aspired to join the 500 race. He made his dream come true, but routinely had bad luck. However, he still managed to get two top tens in ten starts. - Midget Racing (1934 - 1946)- Midgets roared onto the Midwest scene in 1934 and 1935. McQuinn fell in love with the little dynamos and wheeled them with furor, making his name known coast to coast. - Race Officiating (1949-1969)- McQuinn was well experienced in racing and when he was done as a driver, he still continued in his love of racing. He was considered stern, but fair and had his share of controversy. - Piloting (Airplane)- World War II introduced McQuinn to airplanes and he enlisted in the reserve. He worked hard to have the airplane as much a part of the Indianapolis Motor Speedway as the race car was. - Later Years- Having retired from racing activities after 45 years, he accepted a quieter life. His accomplishments were still recognized long thereafter. Reading the excerpts and stories about Harry McQuinn gives an appreciation for the safety issues with racing and how far standards have come across all series. For anyone that has dealt with issues with racing mechanics and politics, reading the evolution of Harry McQuinn's career gives them a respect for what it took for McQuinn to make a career of racing, both on and off the track.

List of All Editions of Harry McQuinn King of the Midgets: Dirt Track, Sprint Car, and Midget Racer; Airplane Pilot; And Race Official