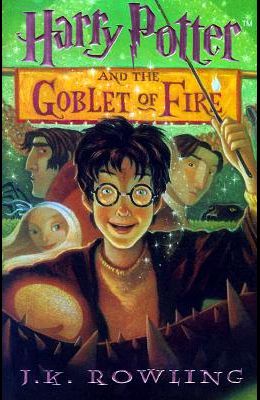 Harry Potter and the Goblet of Fire

The fourth book in this wildly popular series finds Harry Potter back with his muggle relatives, the Dursleys, where he has just had a very disturbing dream involving his mortal enemy Voldemort, the sorcerer who killed his parents years earlier. When he finds his signature lightning bolt scar aching, he suspects it was more than just a dream, so he sends a letter to his godfather Sirius Black, who remains in hiding. As usual, Harry can hardly wait for the school year to begin so he can escape his mean and exceedingly nasty relations and return to Hogwarts School of Witchcraft and Wizardry. Relief from the Dursleys comes two weeks early when Harry is invited to attend the Quidditch World Cup as a guest of the Weasley family. New adventures await Harry at the World Cup and back at Hogwarts, where once again he faces mortal danger from Voldemort. When Harry and his friends Ron Weasley and Hermione Granger arrive at Hogwarts, they soon discover that surprises are in store: Quidditch matches have been canceled in lieu of a very special international tournament, they have a new Master of Defense Against the Dark Arts, Hagrid has obtained some new and rather disgusting specimens for the Care of Magical Creatures class, and Harry develops a crush on fellow Hogwarts student Cho Chang.No Canadian Rights for the Harry Potter SeriesHARRY POTTER and all related characters and elements are trademarks of and (c) Warner Bros. Entertainment Inc. Harry Potter publishing rights (c) J. K. Rowling. (s05)