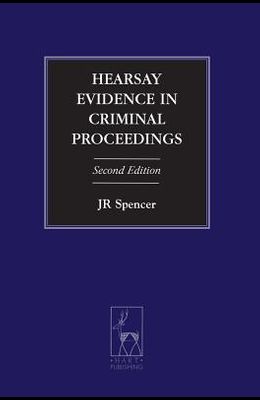 The UK's Criminal Justice Act 2003 re-wrote the hearsay evidence rule for the purpose of criminal proceedings in the UK, enacting the recommendations of the Law Commission together with some proposals from the Auld Review. In 2008, Professor J.R. Spencer wrote a book explaining the new law, intended for practitioners, as well as academics. Following the style of an earlier book by Spencer about the new law on bad character evidence, the core of the 'hearsay' book was a section-by-section commentary on the relevant provisions of the Act, discussing the case law that had interpreted them. Since the appearance of the first edition, the new law on hearsay evidence has been the subject of a spectacular exchange between the UK's Supreme Court and the European Court of Human Rights; the effects of which the Court of Appeal has interpreted in a several leading cases. In this second edition, the commentary is revised to take account of these developments. As with the first edition, the commentary is preceded by chapters on the history of the hearsay rule and the requirements of Article 6(3)(d) of the European Convention on Human Rights. It is followed by an appendix containing the text of the statutory provisions and a selection of the leading cases. The book will be a useful tool for barristers and solicitors appearing in criminal trials and appeals, as well as for practitioners interested in evidence. (Series: Criminal Law Library)

List of All Editions of Hearsay Evidence in Criminal Proceedings