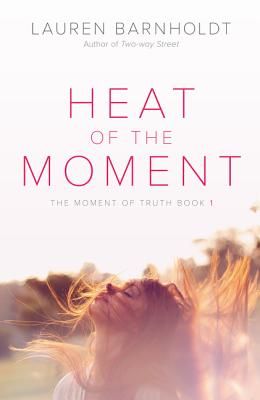 Heat of the Moment

Book #1 in the Moment of Truth Series
by
Lauren Barnholdt

In the first book of Lauren Barnholdt's captivating The Moment of Truth series, Lyla discovers that trusting her head might be easy but trusting her heart is a whole other matter. Lyla McAfee had all but forgotten the email that she wrote to herself freshman year and scheduled to be delivered right before graduation--the one promising that she'd learn to trust by the end of senior year. But when she receives it the first morning of her senior trip to Florida, her life is sent into a tailspin. Soon she's questioning her seemingly perfect relationship with her boyfriend, Derrick, her attraction to the school player, Beckett, and whether ending her friendship with Aven and Quinn, her former BFFs, was one of the biggest mistakes of her life. Each book in this trilogy is told from the perspective of a different girl--Lyla, Aven, and Quinn--former best friends who, back in freshman year, wrote emails to their future selves about the one thing they hope to accomplish before they graduate. Over the course of the series, each girl will learn about life, love, and the truth about the fight that ended their perfect friendship.

From the Back Cover Before graduation, I promise to . . . learn to trust. Lyla McAfee can't wait for her senior trip to Florida. Nothing but sun, sand, and time alone with her boyfriend, Derrick. Too bad nothing goes as planned. Lyla's forced to hitch a ride to the airport with Beckett, the school player. Of course that leads to a nasty fight with Derrick. And to top it all off, she's sharing a hotel room with her two ex-best friends, Aven and Quinn. And then there's that email. The one she wrote to herself as a freshman and scheduled to be delivered right before graduation--an email promising that she'd learn to trust by the end of senior year. Which is ironic since she came up with the idea to message her future self with Aven and Quinn . . . right before they betrayed her. But now that she's gotten the email she can't ignore the promise she made to herself. Even if Derrick is acting strangely. Even if Beckett keeps showing up out of the blue. And, hardest of all, even if trusting her heart might get it broken.

Moment of Truth Series In Order - By Lauren Barnholdt