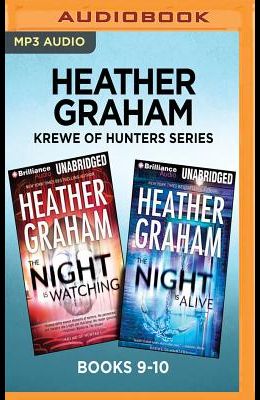 Heather Graham Krewe of Hunters Series: Books 9-10: The Night Is Watching & the Night Is Alive

Book #9-10 in the Krewe of Hunters Series
by
Heather Graham and Luke Daniels
$0.00
Select Format

THE NIGHT IS WATCHING The Old West town of Lily, Arizona, is home to the Gilded Lily, a former theater...and bawdy house. These days, it offers theatrical productions geared to tourists, but the recent discovery of a skull, a real skull, among the props and costumes shakes everyone up. So, who do you call? The Krewe of Hunters, a special FBI unit of paranormal investigators. In this case, it's agent Jane Everett. Jane's also a talented artist who creates images of the dead as they once were. But the Krewe always works with local law enforcement, and here that means Sloan Trent, former Houston cop and now sheriff. His great-great-grandmother was an actress at the Gilded Lily...and she's not resting in peace. Then more remains appear in the nearby desert. As they search for answers, using all the skills at their disposal, Jane and Sloan find themselves falling into danger -- and into love. THE NIGHT IS ALIVE It's a city of beauty, history...hauntings. And one of the most haunted places in Savannah is a tavern called The Dragonslayer, built in the 1750s. The current owner, Gus Anderson, is a descendant of the original innkeeper and his pirate brother, Blue. Gus summons his granddaughter, Abigail, home from Virginia, where she's studying at the FBI Academy. When she arrives, she's devastated to find him dead. Murdered. But Abby soon learns that Gus isn't the only one to meet a brutal and untimely end; there've been at least two other victims. Then Captain Blue Anderson starts making ghostly appearances, and the FBI's paranormal investigation unit, the Krewe of Hunters, sends in Agent Malachi Gordon. Abby and Malachi have a similar ability to connect with the dead...and a similar stubbornness. Sparks immediately begin to fly -- sparks of attraction and discord. But as the death toll rises, they have to trust each other or they, too, might find themselves among the dead haunting old Savannah

Frequently Asked Questions About Heather Graham Krewe of Hunters Series: Books 9-10: The Night Is Watching & the Night Is Alive

Krewe of Hunters Series In Order - By Heather Graham

0
|   0  reviews
Did you read Heather Graham Krewe of Hunters Series: Books 9-10: The Night Is Watching & the Night Is Alive? Please provide your feedback and rating to help other readers.
Write Review

List of All Editions of Heather Graham Krewe of Hunters Series: Books 9-10: The Night Is Watching & the Night Is Alive