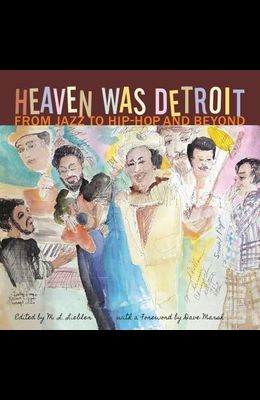 Heaven Was Detroit: From Jazz to Hip-Hop and Beyond

by
M L Liebler and Carole Marsh and Al Young

Heaven Was Detroit: From Jazz to Hip Hop and Beyond is the first of its kind to capture the full spectrum of Detroit popular music from the early 1900s to the twenty-first century. Readers will find in this unique and stimulating anthology new essays, and a few classics, by widely known and respected music writers, critics, and recording artists who weigh in on their careers and experiences in the Detroit music scene, from rock to jazz and everything in between. With a foreword by the acclaimed rock writer Dave Marsh and iconic photos by Leni Sinclair, the book features such well-known writers as Greil Marcus, Jaan Uhelszki, Al Young, Susan Whitall, Gary Graff, John Sinclair, and many others. Divided into nine sections, the book moves chronologically through the early days of jazz in Detroit, to the rock 'n' roll of the 1960s, and up to today's electronica scene, with so many groundbreaking moments in between. This collection of cohesive essays includes Motown's connection to the Civil Rights Movement and the Black Power Movement through its side label, Black Forum Records; Lester Bangs's exemplary piece on Alice Cooper; the story behind the emergence of rap legend Eminem; and Craig Maki's enlightening history on hillbilly rock - just to name a few. With a rich musical tradition to rival Nashville, Detroit serves as the inspiration, backdrop, and playground for some of the most influential music artists of the past century. Heaven Was Detroit captures the essence of the Detroit music scene: the grit, the spark, the desire to tell a story set to the rhythm of the city. Fans of any music genre will find something that speaks to them in the pages of this collection.