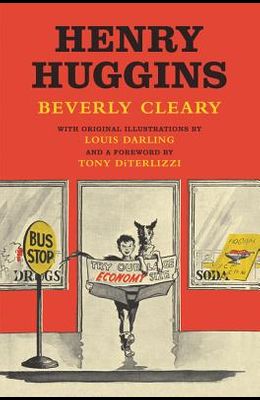 This special edition of Henry Huggins features the original illustrations by Louis Darling--the first artist to ever render Henry, Ribsy, Ramona, and Beezus--as well as a foreword written by New York Times bestselling author and illustrator Tony DiTerlizzi. In Newbery Medal-winning author Beverly Cleary's first novel, boys and girls alike will instantly be charmed by an average boy whose life is turned upside-down when he meets a loveable puppy with a nose for mischief. Just as Henry Huggins is complaining that nothing exciting ever happens, a friendly dog sits down beside him and looks pleadingly at his ice-cream cone. From that moment on, the two are inseparable. But when Ribsy's original owner appears, trying to reclaim his dog, Henry's faced with the possibility of losing his new best friend. Has Klickitat Street seen the last of rambunctious Ribsy?

From the Back Cover Louis Darling was the very first illustrator to give the world of Beverly Cleary a face. His renderings of the Klickitat Street adventures became a gateway to imagination and the joy of reading for generations of children. Now, more than sixty years later, his illustrations once again grace the pages of classic stories by Beverly Cleary. With a foreword by New York Times bestselling author and illustrator Tony DiTerlizzi, Henry Huggins --the beloved author's debut novel--will be enjoyed by a whole new generation of readers! I wish something exciting would happen , Henry Huggins often thought. For a third-grade boy, life on Klickitat Street was just about as exciting as getting your tonsils out. That is, until the thump , thump , thump of a stray dog's tail changed Henry's life forever. From that moment on, the two were inseparable. Beginning with trouble on the bus trip home that leads to a thrilling ride in a police car, Ribsy ensures that Henry will never have another dull moment. Together, Henry and Ribsy cause more excitement than Klickitat Street can handle!