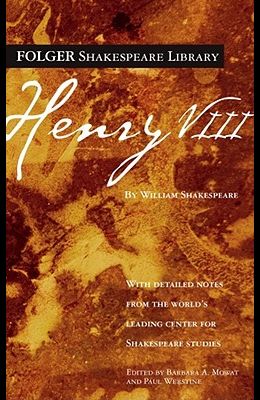 In Henry VIII, Shakespeare presents a monarchy in crisis. Noblemen battle with Lord Chancellor Cardinal Wolsey, who taxes the people to the point of rebellion. Witnesses whom Wolsey brings against the Duke of Buckingham claim he is conspiring to take the throne, yet Buckingham seems innocent as he goes to his death. Henry is also without a male heir. After meeting the beautiful Anne Bullen, he says that he suspects his current marriage to Katherine, with whom he has one surviving daughter, is invalid. Katherine, meanwhile, glows with such splendid integrity that actresses have long desired the role. She advocates for the people, suspects the witnesses against Buckingham, and eloquently defends her conduct as Henry s wife. The authoritative edition of Henry VIII from The Folger Shakespeare Library, the trusted and widely used Shakespeare series for students and general readers, includes: -Freshly edited text based on the best early printed version of the play -Full explanatory notes conveniently placed on pages facing the text of the play -Scene-by-scene plot summaries -A key to the play s famous lines and phrases -An introduction to reading Shakespeare s language -An essay by a leading Shakespeare scholar providing a modern perspective on the play -Fresh images from the Folger Shakespeare Library s vast holdings of rare books -An annotated guide to further reading Essay by Barbara A. Mowat The Folger Shakespeare Library in Washington, DC, is home to the world s largest collection of Shakespeare s printed works, and a magnet for Shakespeare scholars from around the globe. In addition to exhibitions open to the public throughout the year, the Folger offers a full calendar of performances and programs. For more information, visit Folger.edu.